One could be forgiven for assuming the Goodwood Festival of Speed is mainly about cars from the present or past. Typically the biggest headlines come from the biggest and the baddest racecars taking to the hill to take a shot at the all-out record or simply stretch the legs of a four-wheeled legend. That’s not all there is to see though, as Goodwood has placed a large focus in recent years on future tech and what it means for speed in general.

Given our focus is Audi and e-tron specifically, it may be a surprise that Audi wasn’t really the focus of this story. Several Audi legend cars took to the hill at Goodwood, both past like the 200 TRANS AM and present like the 2019 24 Hour of Nurburgring winning R8 LMS GT3. There was also the Audi Sport reveal of the new R8 LMS GT2, all of which we covered on the Audi Club’s main blog HERE and HERE.

For those dialed in specifically to electromobility and specifically the potential future as it relates to the Audi brand, our focus shifted away from the four rings at Goodwood and primarily toward its Volkswagen Group siblings who decided upon a specifically more electrically-driven presence at the Goodwood Festival of Speed event. There was another story that caught our attention too… and we’ll get to that in a moment.

Below, you’ll find a rundown of each of the stories we think most apply to fans of Audi and how it relates to electromobility.

Hot off its record (for an electric vehicle) run at the Nurburgring just a short time ago, Volkswagen Motorsport brought its electric ID.R racer along with pilot Romain Dumas to Goodwood for a shot at the all-out record on the hill.

The previous 20-year old record of 00:41:60 was set by Nick Heidfeld driving a McLaren MP4/13 Formula 1 car. With rain in the forecast for the official hillclimb on Sunday, Volkswagen held nothing back in practice. They came on strong on Friday with a 00:41:18 and then shattered it even further on Saturday with an 00:39:90.

On Sunday, a mix of wet weather meant the ID.R ran on wet weather tires and so it was unable to best the 20-year old record on the official day of competition. While there’s no question the ID.R is now the fastest on the hill, Volkswagen Motorsport will have to return next year if it wishes to be the official record holder at Goodwood.

Porsche Taycan and the J1 Platform

While no roadgoing e-tron models were seen at Goodwood this year, the same can’e be said of e-tron platform-mates. Most significant in that capacity was the Porsche Taycan.

Based on the same group J1 architecture that will underpin the upcoming e-tron GT, the Taycan will arrive on the market first. Given its nearing proximity to production status, Porsche decided to tease the Taycan at Goodwood.

The weekend began with a literal peek, a booth designed to allow Festival of Speed attendees to peek inside an enclosed structure at details of the car via special windows that would share no view if photographed by a camera phone.

Then, later in the weekend, Porsche factory racecar driver Mark Webber took to the Goodwood hill for an impressive exhibition run of the new car.

Volkswagen ID.3 and the MEB Platform

Given Volkswagen had planned a big spectacle with the ID.R, the brand followed it up with a further display of their upcoming ID.3 fully-electric vehicle. ID.3 will be the first car into production from the Volkswagen Group that will be based on the upcoming MEB modular electric matrix.

Closer followers of e-tron connect likely already know that MEB has been confirmed to offer basis for many future Volkswagen Group models, including Audi product. Specifically, Audi showed off a Q4 concept car last spring that offered a glimpse of a crossover to slot between its Q3 and Q5 models that it confirmed as also based on MEB.

With the increasing success of Formula E in which Audi has been competing for several seasons, comes a new series dubbed Extreme E. Like Formula E, this startup will begin with a spec racer provided by the series so all teams will be on equal ground for the start.

Where Extreme E diverges from Formula E is the genre it wishes to bring into electromobility. Rallying is the focus here, though the Extreme E formula skips the typically hot hatch form of FIA’s WRC rallying series and instead has embraced moor of an SUV shape because there are clearly more consumers buying SUVs in today’s car market.

All that being said, this isn’t exactly an SUV like the Audi e-tron or even its ICE brand siblings like the Q7 or Q5. The shape of Extreme E’s so-called Odyssey 21 racer is decidedly more rally raid SUV like you might see on the Paris-Dakar Rally.

Rather than Paris or Dakar, Extreme E intends to deploy an oceangoing transport vessel that will move the series around the world to races planned for areas of environmental emergencies where the exposure of the race series can bring attention to the problem. We suppose Monte Carlo is out then.

For our readers, we’re wondering two main questions regarding Extreme E then.

Check out our full gallery from the 2019 Goodwood Festival of Speed below. 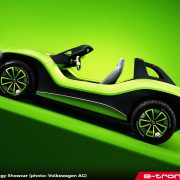 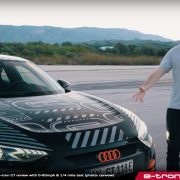 Faster than Formula 1: New Record for the Volkswagen ID.R in Goodwood
0 replies