THE world’s first fully electric racing SUV has been launched at the Goodwood Festival of Speed presented by Mastercard. The all-electric ODYSSEY 21 is set to compete in a new electric racing series, Extreme E, which will take place around some of the world’s most remote areas to highlight the impact of climate change, and promote the adoption of electric vehicles.

Built by Spark Racing Technology, the ODYSSEY 21 completed a demonstration run on the iconic Goodwood Hill Climb course, giving spectators and race fans a first glimpse of the future of electric off-road racing. Race locations for the series will range from the Arctic ice sheets to tropical rainforests – all affected by climate change.

The ODYSSEY 21 is powered by a 400kW (550bhp) electric motor – making it more powerful than current WRC and Rally Raid models. The 1,650 kilogram and 2,300mm-wide SUV will hit 62mph from standstill in 4.5-seconds, and is capable of climbing gradients of up to 130 percent.

Spark Racing Technology will supply teams with vehicles made up of a standardised set of parts, while the electric batteries are produced by Williams Advanced Engineering. Continental Tyres is the official tyre supplier for the series – providing both extreme winter and summer tyres.

Alejandro Agag, Founder and CEO of Formula E – operating partner of Extreme E – said: “The Extreme E-SUV ODYSSEY 21 is unlike anything else in motorsport. The cutting-edge technology our industry-leading partners have employed in its design and construction has resulted in a stunning car, capable of the highest performance in the toughest and most varied environments on the planet.

“Extreme E’s combination of top-level sporting competition and ultra-demanding environments will also prove to be a significant research and development platform for manufacturers, driving further advancements in sustainable mobility.”

Théophile Gouzin, Technical Director of Spark Racing Technology, which also designed the Formula E Gen1 and Gen2 car – said: “Our challenge was to build a car that could face all the variations in surface and terrain that will be thrown its way, which will include gravel, rock, mud, ice, snow, water and sand, too.

“The torque and power density from the powertrain is also a breakthrough. We’re getting huge figures from a small package, which means lighter weight, space savings and ultimately improved economy. All of this innovation and these lessons learned, are transferable from race-car to road – ultimately benefiting the consumer and the sustainable mobility cause.”

Races will use a traditional round-robin format with two groups of six teams. The top four from each group progress to a knock-out stage to earn a place in the final. The off-road stages will be 6-10km (3.7-6.2 miles) in length with a series of virtual gates to be navigated through by drivers.

Testing of the ODYSSEY 21 prototype will get underway in September, with delivery of 12 cars from Spark Racing Technology to follow in March 2020. Group testing then takes place mid-way through 2020 before competitors board Extreme E’s unique floating paddock, RMS St. Helena, ahead of the opening race in early 2021.

The final block of tickets to the Festival have been released. To buy tickets or enquire about hospitality visit www.goodwood.com or call the Goodwood Ticket Office on 01243 755 055. 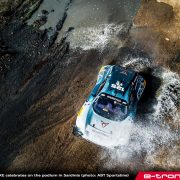 Bentley Dips Toe in EV Water with EXP 100 GT Based on Same J1 Platform as e-tron...
Scroll to top