Fans of the Audi Q8 may have been disappointed when a host of plug-in hybrid Audi models including Q5, A6, A7 and A8 were revealed at the Geneva Motor Show last month. For that group, we offer you these latest spy photos fresh from cold-weather testing that offer pretty conclusive evidence that Audi is readying a Q8 TFSI e for market.

To the untrained eye, this may look like just another Q8 towing a trailer. It’s even wearing 55 TFSI badge, denoting a pretty commonly offered powertrain offered in Europe. It doesn’t even wear the typical mule funkadelic vinyl wrap. Even still, other details make it decidedly more obvious.

For starters, IN on the license plates denotes Ingolstadt registrations. All Audi mules tend to feature those plates unless they’re Audi Sport GmbH mules, in which case they tend to be registered in Neckarsulm and feature HN for that city’s Heilbronn region locale.

Other details on the car itself give away the hybrid status. Like the other TFSI e models revealed in Geneva, there’s a “gas cap” for charging on the left side of the vehicle. Petrol and diesel-powered Audis have fuel filler caps on the right side. So do hybrids. Having a door also on the left suggests charging apparatus. There are little yellow stickers also on the car to communicate that the test mule features a hybrid drivetrain.

As we saw in Geneva, the other plug-in hybrid (PHEV) models are offered in 50 TFSI e, 55 TFSI e and also 60 TFSI e (A8 only) power ratings. The 50 TFSI e features Audi’s 2.0-liter turbocharged 4-cylinder petrol engine mated to a 7-speed S-tronic gearbox-mounted electric motor. Total power is 299 bhp and 450 Nm of torque.

This Q8 is badged a 55 TFSI, so if that is accurate then it is a 55 TFSI e and we can extrapolate details from the previously released Geneva cars. This would suggest the same 3.0 TFSI V6 turbo featured in the American Q8 thus far, here again paired with the 7-speed S-tronic gearbox-mounted electric motor for a combined 367 bhp and 500 Nm of torque.

It’s likely a Q8 TFSI e will also make use of a similar battery configuration to the other TFSI e models that share the MQB architecture. That means a 14.1 kWh lithium-ion battery mounted under the trunk floor. Given the added weight of a petrol engine and the lesser battery capacity than a full BEV vehicle like the e-tron crossover, full-electric range would be limited to about 25 miles. 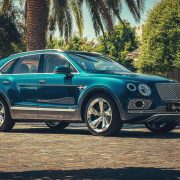 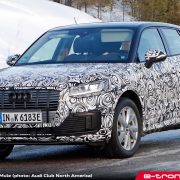 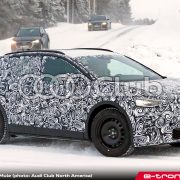 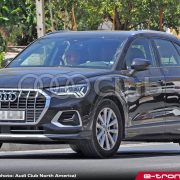