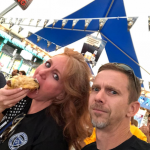 Name : Paul Durst
Location : Greenville, SC
Instagram : @hisrs.heramg
Current cars: 2013 Audi TTRS, stage 2 with additional mods; 2019 Mercedes AMG GLC 63 S; 2014 MT VW Jetta GLI, stage 2 with additional mods; Yamaha FZ09 and XSR700, both tuned with additional mods.
Past cars: …how much time do we have…? 🤔
Dream car: anything by Backdraft Motorsports out of Boynton Beach, Florida
My first Audi was my current one, a 2013 TTRS, which I found in February of 2020 with only 12,500 miles on it. I had wanted one ever since Audi first announced in 2011 they would bring over the 8J TTRS for a limited two year run only. Life happened, priorities changed, and I thought I had missed my opportunity of everything finding a low-mileage one, until I literally stumbled upon this one. I throughly enjoy mountain runs in it, made even better by my wife being a fantastic passenger who shares my enthusiasm for great cars and great people. In August of 2021, I planned and led the Carolinas chapter’s first annual Whiskey Tango Foxtrot (a nod to my 26 years of military service) run, a 100+ mile out and back up some of the best kept secret roads the Upstate region of SC has to offer! Including the highest point along the entire Blue Ridge Parkway at 6,053’, as well as the highest point in South Carolina, Sassafras Mountain, the views were just as appealing as the twisties. I look forward to organizing more mountain runs, promoting the Audi club through local events, and doing fundraising with the 809 Foundation, a Back the Blue charity organization out of Rock Hill, SC.