In 1997 Audi advanced to become the first European carmaker to build a limited edition of a hybrid vehicle – the Audi duo based on the A4 Avant. The drive was provided by a 1.9-liter TDI developing 66 kW (90 hp) and a water-cooled electric motor developing 21 kW (29 hp), powered by a lead gelatin battery in the rear. Both units drove the front wheels.

As in the two previous studies, the production duo followed the trend-setting plug-in concept – its battery could be charged from a socket. Its electric motor could also recover energy during deceleration. In electric mode the duo attained 80 km/h (49.71 mph), and a maximum of 170 km/h (105.63 mph) with TDI power. The concept was far ahead of its time – too far for the market. 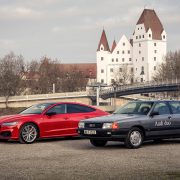 “PHEVs Should Be A Non-Conversation”
Scroll to top