When it comes to lineage, former Audi Sport TT Cup competitor Mikaela Åhlin-Kottulinsky’s family history is intertwined with Audi. Worth noting for e-tron and electric car aficionados, she’s the official development driver for the fledgling Extreme E rally series. And, while Audi has yet to express interest or confirm plans for Extreme E, factors like ABT Sportsline’s confirmation of participation and the series’ focus on SUVs as the loosely stated “body style” of rally car makes the series one extremely interesting thing to watch. This independent Audi e-tron enthusiast blog wouldn’t be surprised at all to eventually see Audi join the competition at some point.

From an editorial standpoint then, e-tron connect has decided to cover Extreme E developments, even if to simply report on the adventures of Kottulinsky and ABT Sportsline until Audi Sport may choose to adopt the series as a motorsport priority and return to the form of racing that helped build the legend of quattro.

Mikaela Åhlin-Kottulinsky recently talked with Continental Tire about her background and about developments of Extreme E and its Odyssey 21 launch spec rally racer. We’ve included the most pertinent parts below, but you can find the full interview HERE.

Continental: Your name is very well known on the Scandinavian racing scene. What appeals to you about motorsport, and how did it all begin for you?

Mikaela: It all began in my family, and I think it´s fair to say that I’d probably not have been racing if it wasn’t for them. Motorsport has been in my family for a very long time, starting with my grandfather who was a works-driver for Audi, developing the quattro system for them. Also, my mother was a works-driver in Rallying, with Audi and Volvo, and my father was among the top rally drivers.

So, as you can see, I was surrounded by motorsport already from a young age.

For me, it all started though when my brother was supposed to sell his go kart, and as his little sister I was always used to inheriting his old equipment and stuff, so I simply asked “Can I drive it?”. However, being a talent from the start is a huge overstatement, I began very slowly but worked my way to my first win step by step. After two years of karting, I finally took my first win!

Continental: Help us to get better acquainted with you away from the race track. How do you spend your free time and how would your friends describe you if we asked them to share their impressions?

Mikaela: Oh, I´m a very dedicated person, so days on the track often means work out, or working with sponsors, emailing, answering questions but of course yes – I also need my free time.

I then like a stress-free environment, since I´m always on the go otherwise.
Sunday strolls, brunch/lunch/dinner with friends, and when I can – dancing! I love to dance, and sing. I´m not so good at the latter, but I really enjoy it!

Continental: You’re currently also testing the new high-performance tires developed by Continental for the electrically powered SUV in the innovative Extreme E racing series. How did this cooperation come about?

Mikaela: It all started with Continental Sweden in 2018, when I asked them for tires for a world record attempt with Red Bull. We needed the best non-studded tires, and I contacted them to see if they could help me out. They did of course– and boom we got the world record!

From that point on, we started a cooperation, which led to international work together with Continental for the launch of the IceContact 3.
With all the testing, driving and drifting, I got a good connection with Continental Sweden, and so they told me about Extreme E, and asked if I´d be interested.

I didn’t hesitate a second when answering “Yes”, and then later got a call from Continental Marketing Tires.

How it all started now feels a bit like a fairytale, but nevertheless, super happy to be in this situation and cooperation!

Continental: During this cooperation, are you the extended arm of the technicians or is it completely the other way around?

Mikaela: Developing a tire is always a communication between the two, always a cooperation exchanging experience, know-how and opinions from the testing, and finding a way and tire that fits both needs as far as possible.

Continental: The challenge is to develop an incomparable tire that meets the requirements of a racing series. In particular, the tires have to work on very different surfaces and in completely different climate zones: in the desert, in the Himalayas, in the rainforest, and in the Arctic. How does this affect the testing that you’re involved in?

Mikaela: Of course it’s a tough challenge, like you say it´s different surfaces, different temperatures, and let’s not forget – always putting the tire to it´s maximum!

Continental though has many years of experience with off-road tires, with many testing hours and kilometers behind them and this is of course worth a lot in a development case like this one.

Continental: The development of a new tire in the SUV segment generally takes three to four years. So in technical terms, there isn’t much time until the start of the first Extreme E season in 2021. How satisfied are you currently with the performance of the Continental tires?

Mikaela: Very satisfied, the first real test we could do was in France in October 2019, and already then the tires were working really well and also performing great for a long time, despite the fact that it was hot, and we drove on a very tough mixed gravel/stone/tarmac surface.

Continental: The Extreme E racing series offers many special features – exceptional vehicles, extreme race locations, and a high moral standard. With their choice of routes in the immediate vicinity of threatened biotopes, the organizers not only want to inspire motorsport fans, but also attract people from around the world, as well as politicians, nearby residents and local authorities, to the race locations to draw attention to climate change, and motivate everyone to redouble their efforts to limit global warming to 1.5 degrees Celsius. Do you think that motorsport can make a relevant contribution toward greater sustainability in different societies?

Mikaela: I believe a series like this one can reach out to people in an engaging way, in a way to encourage us all to change our lifestyle, our choices, and this with a positive mindset. Don’t get me wrong, climate change is not positive, but I believe it´s easier to motivate people to make a change with a positive mindset, instead of a negative one.

If we can make this series exciting, and cool to follow its achievements, and then by ourselves as well make those changes, I believe that will have a big impact and lead to a big, positive change for our world and people.

Continental: The line-up of drivers has not yet been conclusively decided. Famous names such as Daniel Abt, Bruno Senna, and Sacha Prost have been mooted. Why would you like to be on the starting grid?

Mikaela: Because of the previous answer, looking at the affect the series is aiming to reach, but of course as well from a driver’s point of view – this series is going to be a big challenge, and in the end that’s what drives us to overcome and win those challenges!

Continental: Some of the drivers mentioned come from racing series with electrically powered vehicles such as Formula E. Are there noticeable differences in the driving style of racers used to electric motors compared to those familiar with combustion engines? And, if so, are the drivers with e-motorsport experience at an advantage in the Extreme E racing series?

Mikaela: Yes, they are different because in e-vehicles you get the maximum power from the moment you push the pedal. That requires a different way of thinking while driving, but other than that I´d say it´s more valuable to have experience from off-road driving, drifting, ice driving and being able to sense the terrain.

Continental: Finally, back to motorsport racer Mikaela Åhlin-Kottulinsky: When you started racing, who were your role models? And what do you still want to achieve in your sport?

Mikaela: Maybe this is going to sound cheesy, but my mother has always been my role model. She’s a strong, determined woman, with no fears.
Simple answer to the last question – I want to be the first female world champion, in an e-car series!

Continental: In motorsport, fractions of a second often separate victory and defeat. A single error can decide on the outcome of an entire season. This requires a high level of physical and mental ability. How do you ensure that you meet the challenges in the best possible way? Do you have a special fitness program or personal nutritional plan, for example?

Mikaela: You´re very right there, and this is definitely a point that many seem to miss and forget! It´s extremely important to be in the moment, in the right mindset and have your focus on the right place.

I´ve been working with my mental coach Lennart Augustsson since summer 2017, and without him and what I´ve learned from him, I´d never be where I am today.

Also, as you say, fitness and nutrition are very important. In fall 2019, I started to work with Totus Fitness and David Hassan, where we made a body scan and also fully studied how I feel before, during and after a race weekend.

I´ve now been working out and following his program for the last six months, all with a focus for me to be as fit as possible for racing. I sense big progress and have a lot of faith in how we are working together.

For nutrition, I get support from both David, and also Red Bull Sweden, giving me a schedule to follow so that I keep my energy on top during race weekends.

I´ll give you a little secret, small snack every now and then in between is the thing! Keeps my focus on top, but won’t make me feel “full” in the stomach and tired from eating.

Continental: Mikaela, thank you very much for your time. 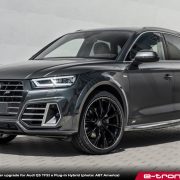 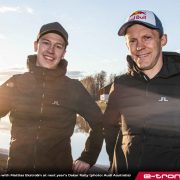 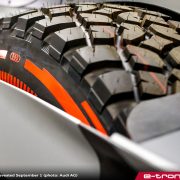