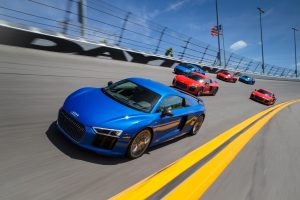 We reported on Monday that an entry level R8 would be powered by a twin turbo V6 but now that rumor has been officially squashed by Audi. When asked by Road & Track about the future of the R8, an Audi spokesperson “unequivocally” told R&T that “there is no V6 planned for the R8.”

When The Drive followed up to that with an email, an Audi spokesperson confirmed R&T‘s report. “We can confirm that there is no V-6 in the product plan and the [previous] coverage is pure speculation.”

This does not bode well for the future of the R8. During an interview between Car & Driver and Audi’s R&D boss, Peter Mertens, he admitted that there are no current plans for a direct replacement.

So it looks like the end for our beautiful friend. Maybe in the future, we will see a successor that is worthy of wearing the R8 badge or maybe we will read that “The reports of my death are greatly exaggerated.”