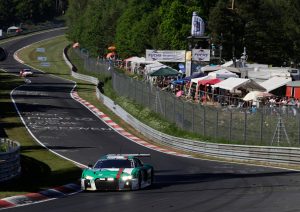 Audi Sport customer racing has set ambitious aims for the Nürburgring 24 Hours. From May 10 to 13, the Audi R8 LMS is supposed to battle for its fifth victory in the iconic endurance race.

Twelve campaigners will be sharing the cockpits. They include three Audi factory drivers from the DTM: Robin Frijns, Nico Müller and René Rast. Audi Sport drivers Christopher Haase, Christopher Mies, Kelvin van der Linde, Frank Stippler, Dries Vanthoor, Frédéric Vervisch and Markus Winkelhock as well as Sheldon van der Linde bring valuable experience and many victories from customer racing to the event. “The Nürburgring 24 Hours has retained its character as an extreme challenge for pros and amateurs to this day,” says Chris Reinke, Head of Audi Sport customer racing. “With the teams supported by us and other private fieldings we are well set in the battle for overall victory. And with seven former winners on board we also have a strong driver squad.”

To prepare, the teams and drivers are using the first races of the VLN Endurance Championship Nürburgring starting this weekend, the qualification race on April 15 and other opportunities.