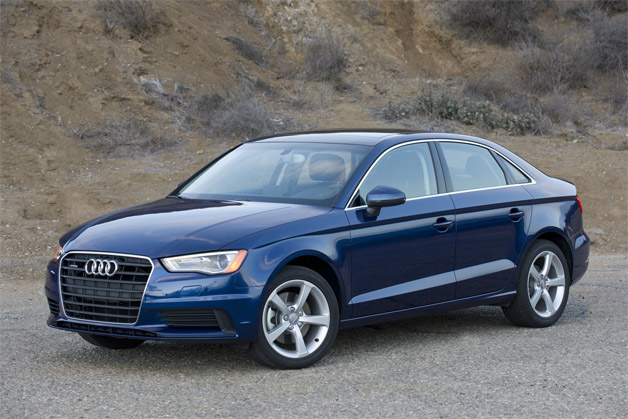 The five-door Audi A3 hatchback, on sale in the States since the 2006 model year, never earned the respect it deserved. Despite possessing the automaker’s well-regarded build quality and a range of strong powerplants (including an excellent diesel option), the entry-level model always played second fiddle to the rest of theAudi lineup, suffering from less innovative technologies and fewer premium options on its list. Many buyers considered it inferior to the rest of the models in the company’s showroom. But those misconceptions could be about to change, as Audi is in the midst of introducing its third-generation A3 family to the States with expectations that the range will finally align with the rest of its portfolio.

First to arrive is this new sedan, notable as it is the first time the A3 has been offered as a compact four door. The new bodystyle is positioned as a premium C-segment offering, with its most obvious competitor being the new Mercedes-Benz CLA-Class (BMW has not officially announced a 2 Series Gran Coupe, which would be the third entrant in the segment). The automaker says its “A3/S3 models will be among the most technically advanced Audi products around” and there will be “no sacrificing Audi craftsmanship and premium appointments.” To put the automaker’s claims to the test, we spent a week with this new sedan in Southern California.

Audi launched its 2015 A3 sedan at the 2013 New York Auto Show. The A3 four-door is constructed on theVolkswagen Group’s new MQB (Modularer Querbaukasten, or Modular Transverse Matrix) platform. Unlike the A4, A5, A6, A7 and A8 models, which utilize a front-mounted, longitudinally placed engine platform, the A3 models ride on a front-mounted, transversely placed engine platform that puts the mass of the powerplant ahead of the front axle (other models that share MQB include the seventh-generationVolkswagen Golf and the recently introduced Audi TT).

Unlike the Mercedes-Benz CLA-Class, which is immediately recognized for its “four-door coupe” styling, the A3 four-door is a traditional three-box sedan that looks like a seven-eighths scale version of the fourth-generation A4. Overall, its styling is clean, conservative and somewhat undistinguished – but it most certainly fits in with the rest of Audi’s lineup. By the tape, the new four-door is 175.4 inches long, making it nearly 10 inches shorter in overall length than the A4, and it rides on a wheelbase that is seven inches shorter than its larger sibling.

Two versions of the A3 sedan will roll into showrooms next month. The standard 1.8T model (base price $29,900), which is only offered with front-wheel drive, features a turbocharged, 1.8-liter inline-four rated at 170 horsepower and 200 pound-feet of torque. The higher-grade 2.0T models (base price $32,900) are fitted with a turbocharged 2.0-liter four, rated at 220 hp and 258 lb-ft. The more powerful engine is only offered with Audi’s full-time Quattro all-wheel-drive system, and the company’s six-speed S-tronic dual-clutch gearbox is standard across the board – no manual transmission is to be offered in North America.