Blue Bird Corp., one of the largest school bus makers in the U.S., has joined a first-of-its-kind collaboration with Audi of America, Applied Information, and Temple, Inc., to deploy cellular vehicle-to-everything (C-V2X) technology aimed at helping reduce vehicle hazards that vulnerable school children face every year.

The Fulton County School System, located in the Greater Atlanta Metropolitan Area, has also joined the deployment, lending its expertise in school transportation and infrastructure. These new partners bring automotive and school bus technology expertise together with a large and experienced school bus fleet operation to maximize potential safety and driver support.

“The addition of Blue Bird and a large school district like Fulton County Schools completes the picture of all major players who are eager to unlock the benefits of emerging C-V2X technology for children too often exposed to danger during their school days,” said Brad Stertz, director, Government Affairs, Audi of America. “We expect this noteworthy project to show that C-V2X is an indispensible safety tool for educators nationwide.”

Audi believes C-V2X can provide significant safety benefits to alleviate traffic risks facing vulnerable road users. Children are among the most vulnerable and continue to be at great risk in school zones, especially when other vehicles are present and vehicles fail to yield for pedestrians. Additionally, stop-arm violations continue to be a danger to school children – when a driver speeds up or fails to stop when a school bus is flashing its red signal lights and extending its stop sign.

“This technology can help prevent accidents during student pickup and dropoff, which is when students are most at risk,” said Trevor Rudderham, SVP, product planning, Blue Bird Corporation. “While more stringent stop-arm laws and even camera systems help bring awareness to school buses, C-V2X could be programmed to warn drivers of upcoming school bus stops.” 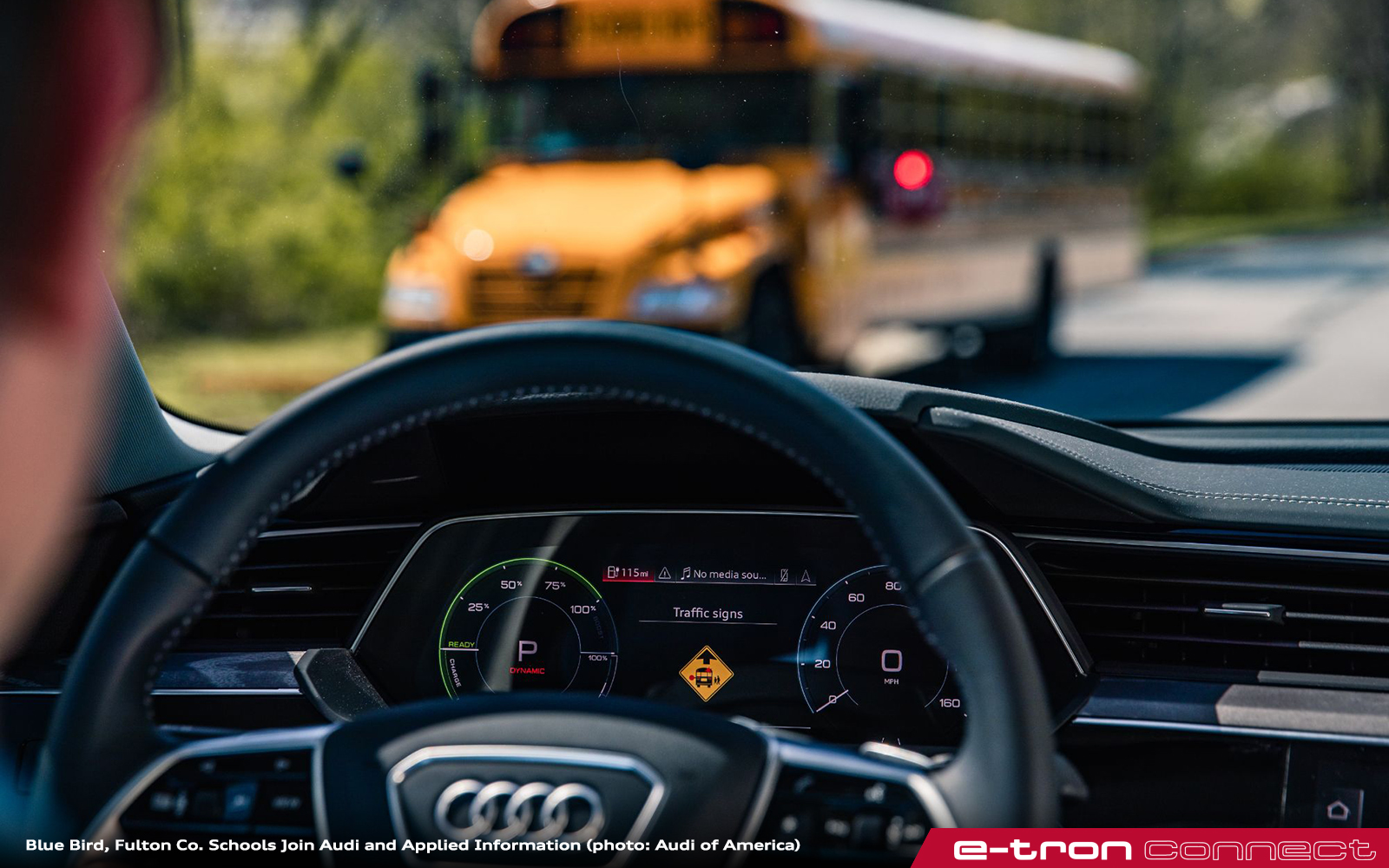 C-V2X technologies use both direct (PC5) and indirect (Uu) low-latency cellular signals to communicate where people and vehicle sensors cannot always see, such as over hills or around curves or other vehicles. Last November, the Federal Communications Commission finalized guidelines for next-generation 5.9 GHz signals to be allocated for automotive-focused C-V2X communications, clearing the path to bring technologies to drivers across the U.S. in the next several years.

Initially announced last October and being codeveloped at the Volkswagen Group Innovation and Engineering Center in Belmont, California, and the Infrastructure Automotive Technology Laboratory (iATL), this C-V2X technology is scheduled to be brought to the Fulton County School District in Georgia this spring using a Blue Bird propane-powered school bus and a 2021 Audi e-tron Sportback electric SUV.

“The Fulton County School District is excited about this opportunity to bring yet another technological innovation to the fourth-largest public school bus fleet in Georgia,” said Trey Stow, director, Transportation Services, Fulton County Schools. “We hope this test helps provide information that enhances safety for our students and community in the future and are excited to add partnerships with Audi and Applied Information to the long-term relationships we have had with the City of Alpharetta and Blue Bird.”

In addition to propane-fueled buses, Blue Bird is the only school bus maker in the U.S. that builds electric variants of all three school bus types – A, C, and D. By the end of 2021, Audi is expected to have the largest luxury portfolio of fully electric vehicles in the U.S., with the anticipation of 30% of its portfolio being electrified by 2025.

“It is with huge passion that we hope to use C-V2X technologies to help improve the safety of school zones for our children,” said Pom Malhotra, senior director, Connected Services, Audi of America. “With our partners, we aim to leverage C-V2X technologies to find viable applications and business models to fast-forward innovative technologies in Audi vehicles in the very near future and benefit all road users – especially those most vulnerable: school children.”

The goal of this deployment is to demonstrate technologies that could help prevent accidents both within school zones and when children are being picked up or dropped off at their bus stop. The first application from this program is designed to warn drivers when they are approaching an active school safety zone or are exceeding the speed limit when children are present via instrument displays and audio alerts.

When active, roadside units (RSU) installed in school zone safety beacons — flashing signs that are intended to slow drivers down as they pass by a school — will broadcast messages to development vehicles indicating the location of the school and the reduced speed limit. This initial deployment aims to alert drivers to the changes in speed limit as school times change due to circumstances, such as half school days and early dismissals for weather. 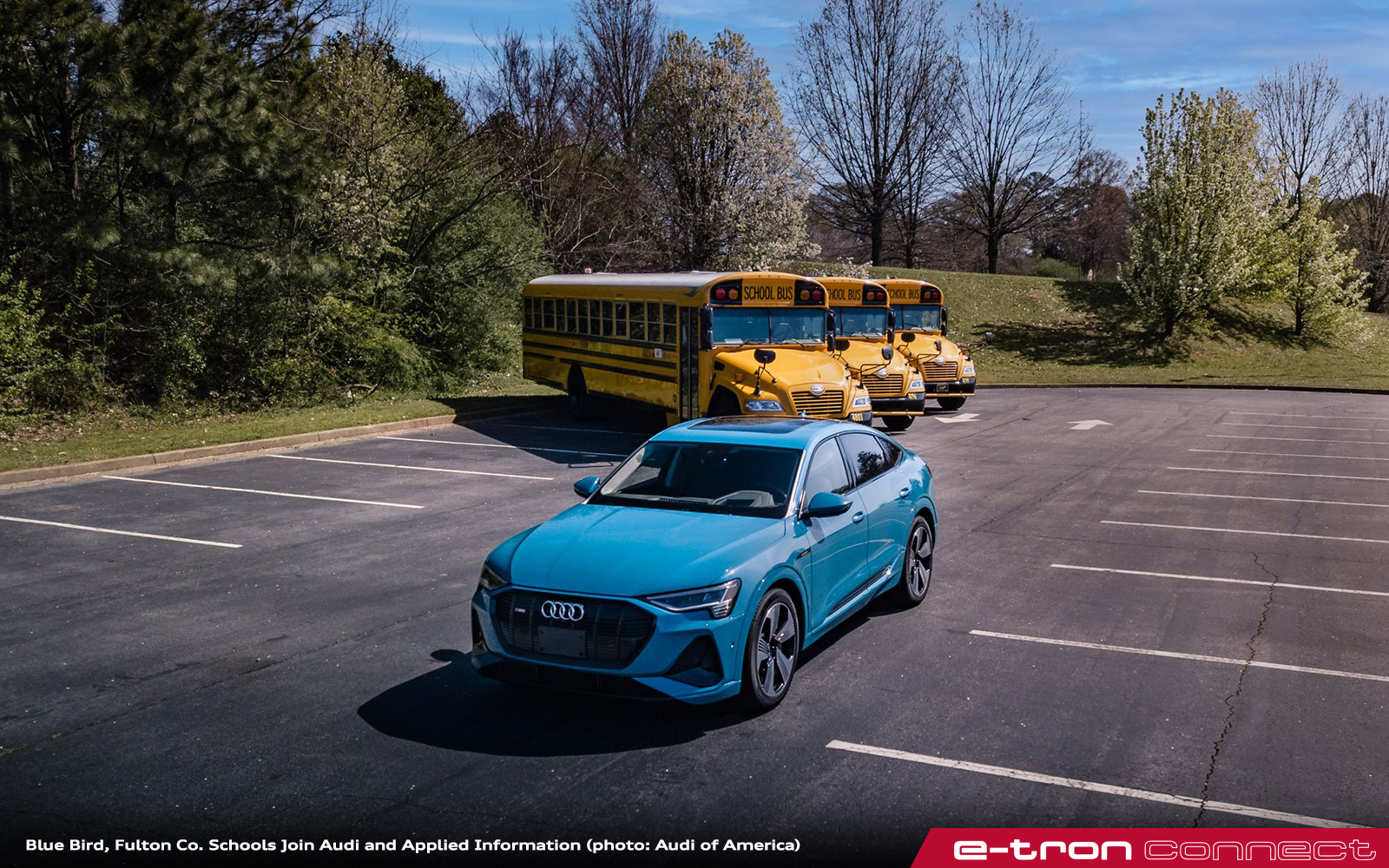 The second application aims to warn drivers when they are approaching a school bus stopped to pick up or drop off students. In this application, onboard units (OBU) are being developed to broadcast C-V2X safety messages from school buses to C-V2X-equipped vehicles when the bus stop arm is extended to indicate no passing is allowed. The project is expected to be completed in the first half of 2021.

“We are excited to have Blue Bird as a major component of this public/private partnership developing these potentially life-saving applications,” said Bryan Mulligan, president, Applied Information, Inc.  “As the leading innovator in school bus safety and efficiency, Blue Bird will help make these safety applications standard practice in the industry.”

Through this program, partners look to gain insights about the distance needed around school zones and buses to ensure the safety of children in a continuing effort to lessen accidents and fatalities. According to the latest data from the National Highway Traffic Safety Administration, 2018 saw nearly 6,300 pedestrian fatalities in the U.S. — the highest rate since 1990. Additional data shows on average approximately 131 children killed and approximately 25,000 injured each year walking to or from school.

A number of studies have also reported that stop-arm violations continue to be one of the greatest dangers to school children.

This program is in conjunction with iATL, which is based in Alpharetta, Georgia, and is one of the largest connected-vehicle testing facilities in the world, allowing for a wide array of public-private partnerships and technology development. It also benefits from carrying a license for PC5 direct wireless communication within 75 square miles of its facility. Temple, Inc., is lending its expertise of integration and management of the new technologies.