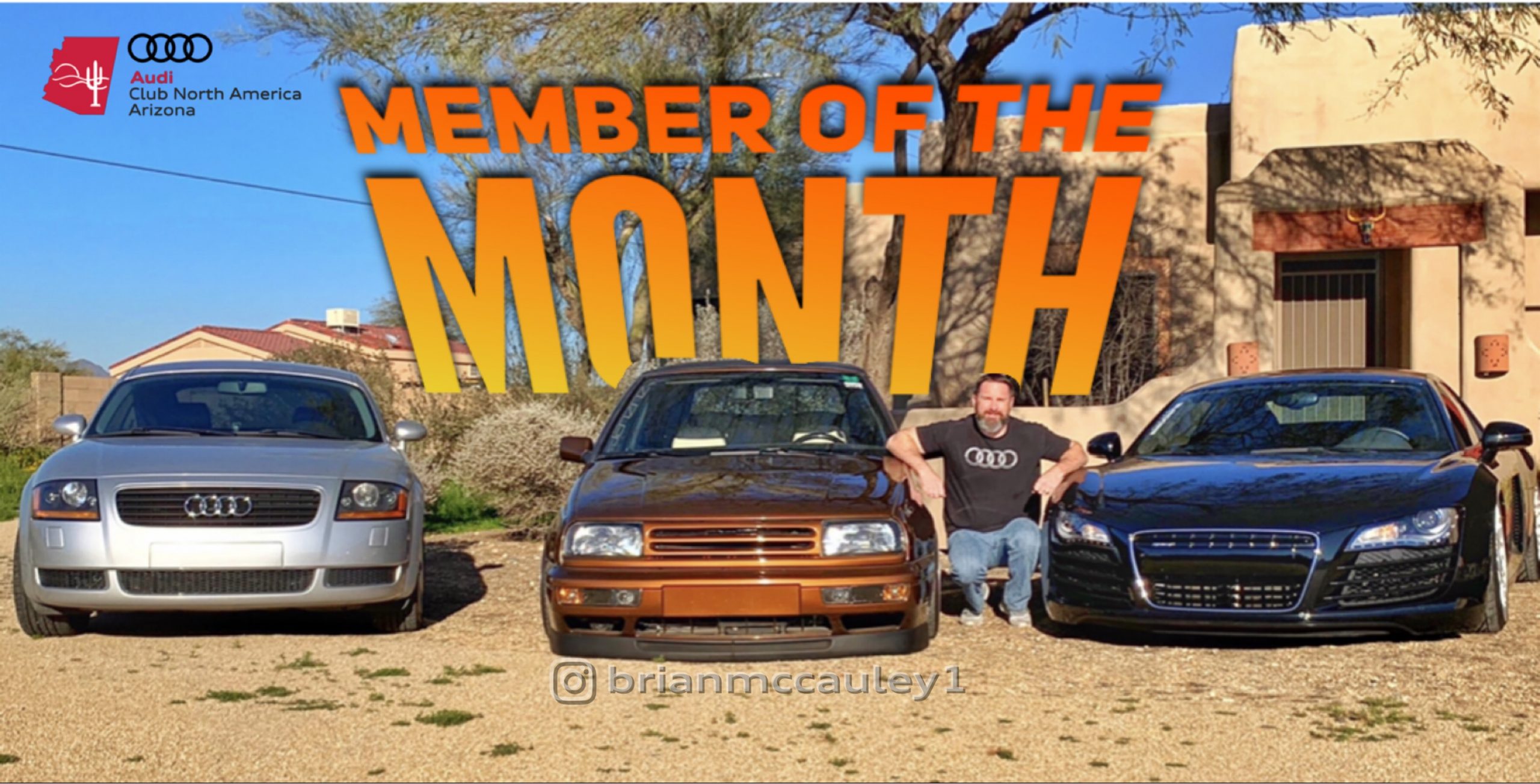 Audi Club Arizona is proud to introduce Brian McCauley to you.  Brian is our May Member of the Month!  Congratulations Brian.
We asked Brian some questions and you’ll be amazed at his answers.  We are very lucky to have Brian as an active member in our chapter.
𝙏𝙚𝙡𝙡 𝙪𝙨 𝙖𝙗𝙤𝙪𝙩 𝙮𝙤𝙪𝙧𝙨𝙚𝙡𝙛, 𝙨𝙤𝙢𝙚 𝙛𝙪𝙣 𝙛𝙖𝙘𝙩𝙨….
I am a diehard car fanatic that didn’t start out that way.  I didn’t want to get my license when I could, and got it with the mindset of finally shutting up my older brother to stop bugging me about it.  Little did I know that cars would turn in to a hobby, passion and 16+ year career with them.  My parents had a lot of cars (nothing expensive or special) and that bug wore off on me from an early age I guess.
𝙏𝙚𝙡𝙡 𝙪𝙨 𝙖𝙗𝙤𝙪𝙩 𝙬𝙝𝙞𝙘𝙝 𝘼𝙪𝙙𝙞 𝙮𝙤𝙪 𝙙𝙧𝙞𝙫𝙚, 𝙬𝙝𝙖𝙩 𝙮𝙤𝙪 𝙡𝙤𝙫𝙚 𝙖𝙗𝙤𝙪𝙩 𝙞𝙩 𝙖𝙣𝙙 𝙝𝙖𝙫𝙚 𝙮𝙤𝙪 𝙙𝙤𝙣𝙚 𝙖𝙣𝙮 𝙢𝙤𝙙𝙨 𝙚𝙩𝙘…..
This is a long one.  Having sold Audi’s for 16+ years now I have been the owner/lease of 21 of them and counting.  Currently my husband, Dan, and I have seven: a 2009 R8 V8 gated 6 coupe, a 2019 RS 3, a 2002 S4 sedan, a 2005 allroad, 2000 TT 180Hp FWD, a 2000 TT 180hp Quattro and a 2001 TT 225hp Quattro.  I’ve had a 2006 A3 hatchback that went to SEMA in 2005, a 2008 big turbo A3, a 2012 S4, 2012 TT, a 2013 allroad, a 2018 A4 and many others along the way (as well as 18 VW’s).
Although the R8 is spectacular and the RS3 is the fastest I’ve owned, the 2006 A3 that went to SEMA via Fourtitude.com is my most memorable.  It went from just hitting US showrooms to Vegas within 6 months and had products that were prototypes and not even available in the country at that time. It was a truly amazing experience.
𝙃𝙤𝙬 𝙙𝙞𝙙 𝙮𝙤𝙪 𝙛𝙞𝙣𝙙 𝙤𝙪𝙩 𝙖𝙗𝙤𝙪𝙩 𝙩𝙝𝙚 𝙘𝙡𝙪𝙗?
That’s a funny one.  I am actually the founding President of our Arizona chapter.  I was asked by my GM at the time whom was asked by then Audi President Johan de Nyschen to push the ACNA to expand across the USA.  It was a lot of work to get the club up and running, but with a lot of local enthusiasts and sponsors, the club did very well in its first few years.
𝙒𝙝𝙖𝙩 𝙝𝙖𝙨 𝙗𝙚𝙚𝙣 𝙮𝙤𝙪𝙧 𝙛𝙖𝙫𝙤𝙧𝙞𝙩𝙚 𝙥𝙖𝙧𝙩 𝙖𝙗𝙤𝙪𝙩 𝙩𝙝𝙚 𝙘𝙡𝙪𝙗 𝙨𝙤 𝙛𝙖𝙧?
The events and drives that have been organized.  Seeing different people attend them, meeting new members and catching up with members that I helped sign up in the early days of the chapter.  Attending them with my husband whom I’ve made an Audi addict has been the best part.
We appreciate you Brian and thank you for starting the Arizona Chapter!