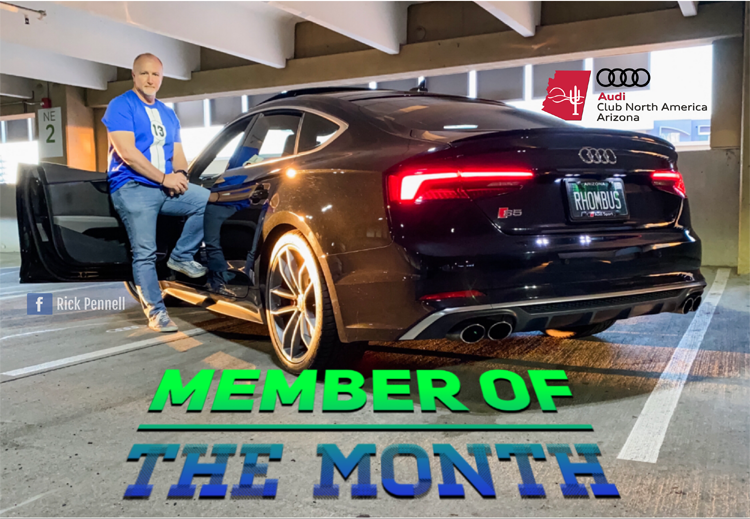 Audi Club of Arizona would love to introduce you to our April Member of the Month, Rick Pennell.  Rick is one of those members that you look forward seeing at events and drives. You’ll get to read more about him below. One of the things that most do not know, Rick is an talented photographer and videographer, a amazing talent.  Rick has been helping posting photos and all things Audi stories on Facebook.   Our members and followers enjoy the interesting stories.  Did you know that Audi Club Arizona has their own You Tube Channel?  Yes we do, Rick started the channel and has produced some great videos for the club that makes our chapter stand out.  Make sure you subscribe to Audi Club NA Arizona Chapter and there you will get to see some of his talent shine.  We like to thank him for the countless hours he gives to the club.  You da man, Rick!

– Tell us about yourself, a few fun facts.

TIME-LAPSE: Born in Missouri. Tornado alley child of Texas. Former Bering Sea crab fisherman.  Developed architectural design skills in Hawaii.  Then called Scottsdale home.  I had a couple of college buddies who had Audi’s, but it was the first R8 that really got my attention.  I’m a bit of a racing fan and have followed Audi’s presence in the WEC at Spa and LeMans, the R8 LMS GT3’s, DTM’s RS5, and the recent new comer, Formula E.

– Tell us about what kind of Audi you have, what you love about it and if you have done any modifications to it.

NEVER COMPROMISE: Some people leave home at 10am on a Saturday morning, aimlessly drive around to different car lots and pick a vehicle without any preconceived notion about what they will be driving home at the end of the day.  I sincerely hope those people are happy.  Its probably a much easier choice than someone who has an overwhelming passion for what they want.  In 2014 my passion was prepared to purchase a new S5.  That is, until I got wind of the Sportback version available only in Europe, that was on its way to the U.S. market.   So began the waiting (stalking) game.   For the next 4 years I could be found at the dealership on Thursday nights after it closed, taking note of all of the available options.  Comparing color under different light conditions and checking service records. I began changing my habits, little tings like stop wearing a belt clip for my phone to avoid damaging the seats.  I also started removing clutter carried in my glove box and trunk.  I even prepared a special playlist because the new models now came with Apple CarPlay.

My Audi is a 2018 S5 Sportback 3.0T TFSI 354hp V6 quattro Tiptronic. Mythos Black exterior.  Rotor Gray interior w/ Anthracite contrast stitching. Carbon Atlas inlays. Navigation Package. S Sport Package. B&O 3D Sound System. No mods for now, it is precisely what I wanted.  Well close… at the time, the Black Optics package was not available for my S5, I do plan to make that change.

– How did you find out about the club?

JOIN THE CLUB: During my stalking phase, the Audi Club North America began to appear in my searches. That was quickly followed by the local Audi Club Arizona.  I checked the website, and joined. Easy as that.

– What has been your favorite thing and/or event about the club so far?

PEOPLE MAKE THE DIFFERENCE: I’ve attended many of the Audi Club AZ events.  There is a big variety to chose from, and its nearly impossible to attend all of them.  I love the Rally in the Valley, and our team looks forward to it every year.  Although not much of a driving event, my favorite event so far has been the Legends of Speed Exhibition at the Phoenix Art Museum.  This exhibit was perfect for all car and race enthusiast, with rare examples of the machines that paved the way for the vehicles we drive today.  But, the people make the difference, getting together as a group is really special.  Connecting with existing, or meeting new members is always fun.  There is a huge range in ages and vehicles and everyone is so eager to share the experiences.

Thanks again Rick, it is interesting.