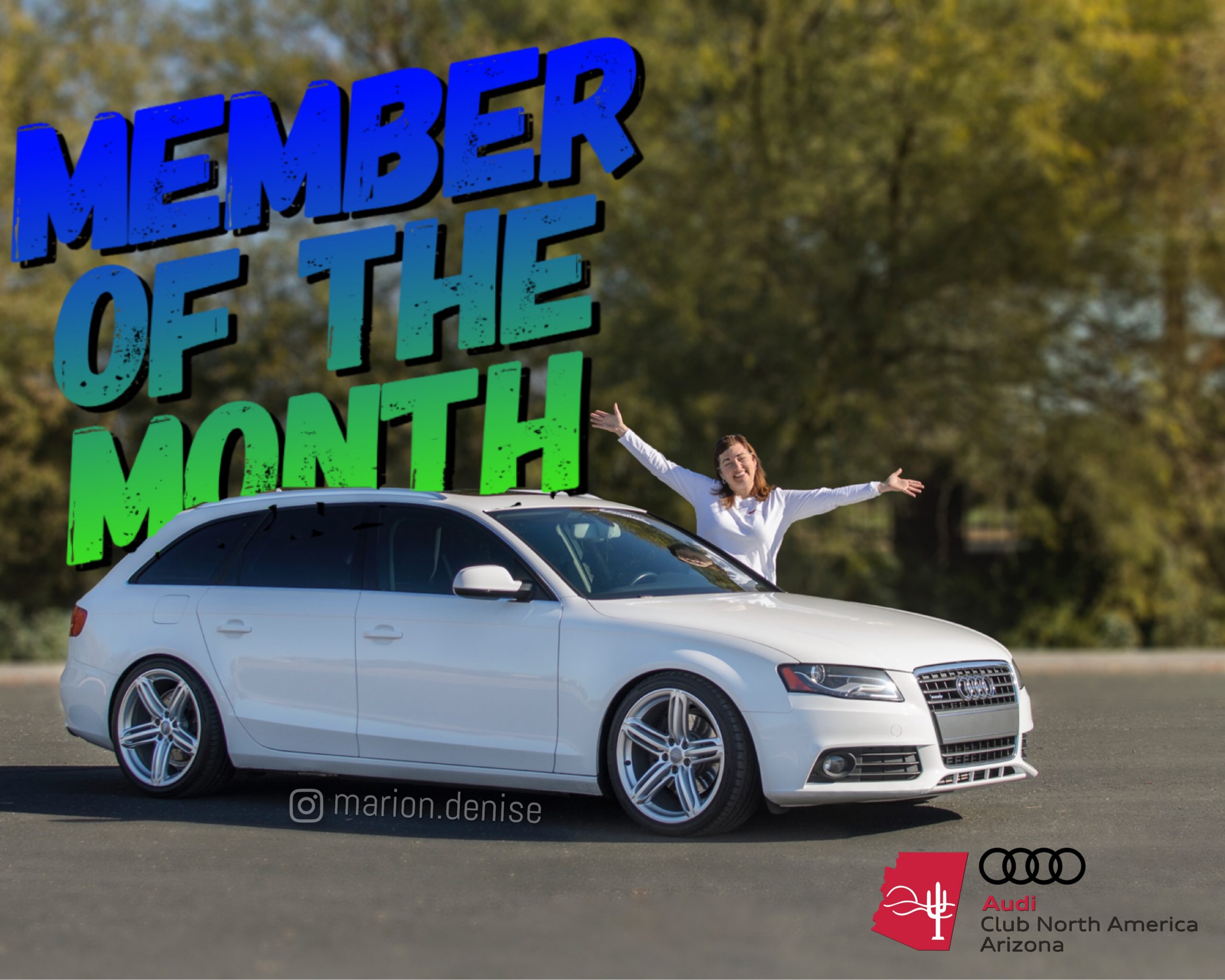 We would like to introduce you all to Denise Marion, she is our March Member of the Month.

About me:  I was born and raised in and around Cleveland, Ohio and moved to Arizona in 2008.  My Dad was a mechanic and bodyman so it was all cars, all the time.  I knew how to change oil before I could drive (legally of course).  Dad used to buy old cars, fix them up mechanically, add a little Bondo here and there, and sell them for a profit.  It’s how we went on vacations in those years.  I asked him once how many cars he had owned; the list contained 67 cars!  His pride was a 1978 Chrysler Cordoba; he kept it looking better than showroom new for the Thursday and Friday night cruises he would take me on.

My first car was a 1986 Toyota Tercel in silver.  She answered to the name of Sylvia and was a very good girl.

Kevin Sargent has taken me along for the VAG Group ride.  First it was VWs and now it’s Audis.  I also have a poor, neglected 1988 triple white Cabriolet patiently waiting in the garage for us to stop paying attention to the Audis.

I work as a graphic designer for a Phoenix commercial printing company and have become the resident graphic designer for the Club.  I appreciate all the great feedback on the car decal logo and limited edition logo t-shirts I designed so I hope to do more for the Club in the future.  The Club has some of those limited edition collector’s t-shirts in inventory now but they’ll be gone soon.  Future plans include designing hats and  one-time-only commemorative t-shirts for special future drives like overnight to Monument Valley, our favorite drives like Jerome and our adventures on AZ 89A.

I have a Doberman obsession.  It started when I was about 8 years old and would visit a Doberman who lived on my paper route.  Our household’s focus is on Edana, the elder, and Aengus, the young man of the family.  Aengus is currently undergoing having his ears posted in order for them to stand tall and straight as an adult.  No, they do not receive microwave signals that translate the dog’s orders to his humans.  Edana used to take Kevin on a 1.5 mile run at 4:30am every morning, but that has been curtailed with young Aengus’s arrival and his own walking schedule.

About the car:  I drive a 2010 A4 Avant Prestige with a sport package in Ibis White.  Things that have been done include a 2015 Q5 motor swap, Milltek dual tip 2.75” resonated cat back exhaust including downpipe, Koni Yellow dampers on Eibach 2.5” drop springs, turbo muffler delete with high flow intake and silicone intake hoses, Stoptech cross drilled rotors with performance pads, S5 19×9” “Peeler” wheels, APR stage 2 (soon to be upgraded to new GIAC file as my Christmas present, yah!).

The better half discovered the Audi Club – I just showed up 🙂

I think the best thing I like about the club is how welcoming everyone is.  It doesn’t matter what you’re driving or where you are with care, maintenance and upgrades, there is always someone there interested and willing to help refer you to what you might need.